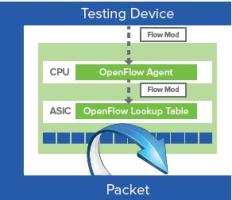 Networking vendors building SDN products and the companies deploying them are asking us about how to test their OpenFlow performance. While the process of testing a switch to verify it meets Open Networking Foundation’s (ONF) OpenFlow conformance specifications is well understood and standardized, our customers have a real “need to know” not only that OpenFlow meets specs and the seal of approval by ONF, but also that it performs as expected and desired.

Spirent offers OpenFlow Performance testing and test methodologies for companies who know that testing performance counts. Deliver best in breed products by testing both conformance to the standards, then test how your Openflow devices are performing.

For example, for gauging OpenFlow performance of an Ethernet Switch you need to test: