Improving security and robustness of Cloud, IoT, and Internet Services 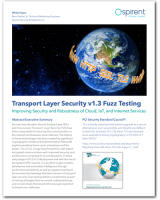 For over two decades, Secure Sockets Layer (SSL) and its successor Transport Layer Security (TLS) have been responsible for securing the communication in the network and between smart devices. The history of these technologies has been marked by significant cryptographic breaks and implementation flaws with exploits wreaking havoc upon enterprises and the public. TLS v1.3 is a huge leap forward for web based encrypted communication with improved security, and performance compared to its predecessors. In these early stages of TLS v1.3 deployment and with the rise of encrypted traffic volume, it is prudent to gain realistic, preemptive and actionable intelligence through performance/scalability as well as negative testing of the services that leverage this latest version of transport layer security. Fuzz testing delivers randomness as part of testing strategies that can reveal undetected bugs and compromises that would otherwise get exploited to breach your defenses.